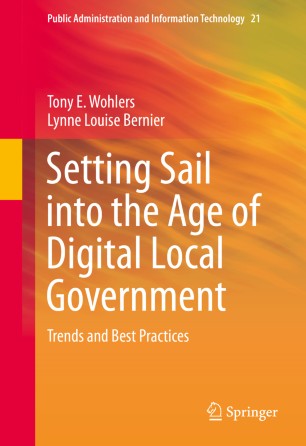 Setting Sail into the Age of Digital Local Government

The Internet and related technologies have dramatically changed the way we live, work, socialize, and even topple national governments. As the Internet becomes increasingly pervasive across societies, we find more often that governments adopt Information Communication Technologies (ICTs) as part of their toolbox for facilitating efficient and citizen-oriented service delivery at all levels of government. Local governments across the major industrialized democracies have not been an exception to this trend and have set sail into the age of digital government. Closest to their citizens, towns and cities have adopted ICTs to facilitate electronic government (e-government). While research on local e-government functionality in terms of information dissemination, service delivery, and citizen engagement continues at an impressive empirical and methodological pace, gaps in our knowledge remain. Cross-national comparative research on local e-government that covers a wide range of municipalities in combination with in-depth case study analyses is lacking. Informed by a comparative case study approach, this book seeks to narrow that gap and offer practical policy solutions to facilitate local e-government. We do so by pursuing both a macro and micro perspective of e-government functionality in the federal republics of Germany and the United States and unitary France and Japan. The macro perspective focuses on the state and scope of e-government functionality across a large number of randomly selected municipalities of all sizes in these advanced industrialized countries. Based on a small sample of case studies, the micro perspective analyzes the successful implementation of e-government in Seattle (United States), Nuremberg (Germany), Bordeaux (France), and Shizuoka City (Japan).