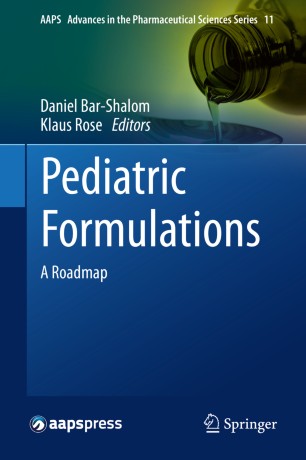 As the first book that specifically addresses pediatric formulations in the context of drug development, Pediatric Formulations: A Roadmap covers anatomy and physiology of children as well as the technical state of the art, gives hints about where to find inspiration, and provides a suitable background on the regulatory framework. Existing books on pediatric formulations mainly discuss compounding at the pharmacy. This is not a “how to formulate” textbook for pharmaceutical scientists; the subtitle “A Roadmap” indicates that we are on a path in largely unexplored territory. It is an attempt to equip the reader with necessary information on how to get started with the appropriate mindset.

Among medicinal specialties, pediatrics is a young discipline. The potential dangers of medicine were often underestimated in earlier times. Cough suppressants labeled as “suitable for children and adults” a hundred years ago could kill children as they contained opioids. Since then, a complex framework has evolved, with physicians, pharmacists, drug development companies, generic companies, academic scientists, regulatory authorities, reimbursement organizations, patients and children’s parents as key players. The position of children in our society has changed dramatically during the last century. Children were protected against clinical trials, yet thanks to clinical trials, many more children with cancer survive today. The development of age-adjusted drug formulations is not only a technical challenge. For new drugs today, there are laws both in the United States and the European Union that compel the research-based pharmaceutical industry to also consider children during drug development. One of the major demands of authorities is the development of age-appropriate formulations.

Daniel Bar-Shalom is an Associate Professor in Drug Delivery at The Faculty of Health and Medical Sciences, University of Copenhagen. He has a degree in Biology from The Tel-Aviv University (1975), carried research in botany and then graduated from the School of Pharmacy, Hebrew University of Jerusalem (1982). He is a qualified pharmacist and has managed and owned a pharmacy in Haifa where he gained insight into the needs and idiosyncrasies of patients. He moved to Denmark in 1986 and founded Egalet, a drug delivery company where he served until 2007 as Vice President, R&D. He has been a consultant for various pharmaceutical and medical device companies. He is also the inventor of various technologies, holds many patents and has formulated marketed products. His main interests are controlled drug delivery and in particular oral pediatric formulations and geriatric formulations addressing the problem of polypharmacy.

Dr. Klaus Rose is CEO of Klausrose Consulting, Switzerland and advises on pediatric drug development and how to comply with FDA and EMA pediatric requirements. He has studied Latin languages, psychology and medicine. After postgraduate clinical training in general medicine in Germany and England, he joined the pharmaceutical industry. He has held various positions in R&D and medical affairs, was Global Head Pediatrics Novartis from 2001 to 2005 and was Global Head Pediatrics Roche from 2005 to 2009. After a year with a regulatory consultancy, he established his own business. Dr. Rose is a frequent speaker on international conferences on pediatric drug development, organizes trainings and publishes on a regular base.