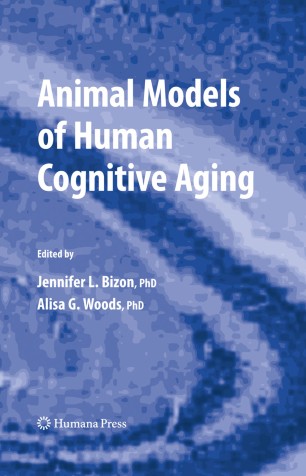 Significant improvements in lifestyle and medical science are leading to an ever increasing elderly population in the United States and other developed nations. The U.S. census bureau estimates the number of people over 65 will nearly double by 2030, and that the elderly population will comprise nearly one-fifth of the world's entire population within the next twenty years. In Animal Models of Human Cognitive Aging, Jennifer Bizon, Alisa Woods, and a panel of international authorities comprehensively discuss the use of animal models as a tool for understanding cognitive changes associated with the aging process. The book provides substantive background on the newest and most widely used animal models in studies of cognition and aging, while detailing the normal and pathological processes of brain aging of humans in relation to those models. Additional chapters comprehensively review frontal cortical deficits and executive function in primates as related to humans, and the use of transgenic modulation in mice to model Alzheimer's and other age-related diseases. Groundbreaking and authoritative, Animal Models of Human Cognitive Aging provides a valuable resource for Neuroscientists, Gerontological Scientists, and all aging medicine researchers, while serving as a primer for understanding current brain aging studies.