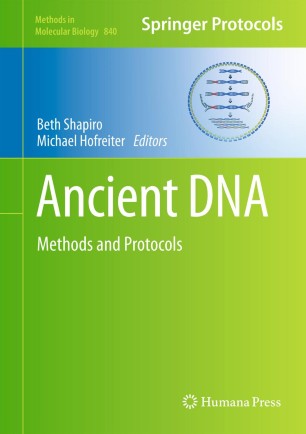 Research into ancient DNA began more than 25 years ago with the publication of short mitochondrial DNA sequence fragments from the quagga, an extinct relative of the zebra. Ancient DNA research really gained momentum following the invention of PCR, which allowed millions of copies to be made of the few remaining DNA molecules preserved in fossils and museum specimens.  In Ancient DNA: Methods and Protocols expert researchers in the field describe many of the protocols that are now commonly used to study ancient DNA. These include instructions for setting up an ancient DNA laboratory, extraction protocols for a wide range of different substrates, details of laboratory techniques including PCR and NGS library preparation, and suggestions for appropriate analytical approaches to make sense of the sequences obtained. Written in the highly successful Methods in Molecular Biology™ series format, chapters include introductions to their respective topics, lists of the necessary materials and reagents, step-by-step, readily reproducible laboratory protocols, and key tips on troubleshooting and avoiding known pitfalls.

Authoritative and practical, Ancient DNA: Methods and Protocols seeks to aid scientists in the further study of ancient DNA and the methodological approaches in ancient research.