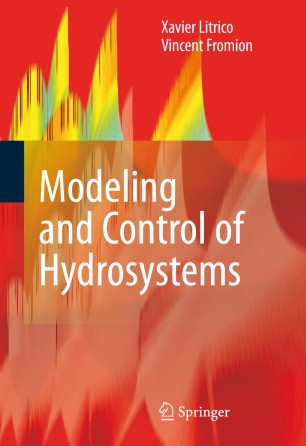 Modeling and Control of Hydrosystems

Since antiquity, humanity has used engineering techniques to manage the transport and distribution of its most important resource – fresh water. Population growth and climate change are making the good management of water resources ever more essential and this book focuses on advanced methods for the control of water flow in open-channel systems.

Open-channel hydraulics are described by hyperbolic equations, derived from laws of conservation of mass and momentum, called Saint-Venant equations. In conjunction with hydraulic structure equations these are used to represent the dynamic behavior of water flowing in rivers, irrigation canals, transportation waterways and sewers. A lot of water is wasted because of poor management of such systems and automatic control has long been identified as a possible way to improve their operational management.

Building on a detailed analysis of open-channel flow modeling, Modeling and Control of Hydrosystems constructs control design methodologies based on a frequency domain approach. The difficulty involved with rigorous design of boundary controllers for hyperbolic systems is well known but, in practice, many open-channel systems are controlled with classical input–output controllers that are usually poorly tuned. The approach of this book, fashioning pragmatic engineering solutions for the control of open channels is given rigorous mathematical justification. Once the control objectives are clarified, a generic control design method is proposed, first for a canal pool, and then for a whole canal. The methods developed in the book have been validated on several canals of various dimensions, from experimental laboratory canals to a large scale irrigation canal.

From the detailed analysis of realistic open-channel flow dynamics, and moving to the design of effective controllers, Modeling and Control of Hydrosystems will be of interest to control and civil engineers, and also to academics from both fields.

A set of MATLAB® files are provided (available from www.springer.com/978-1-84882-623-6) so that the interested reader can test the methods developed in the book. These MATLAB® files also use Simulink® and the Control System Toolbox™.