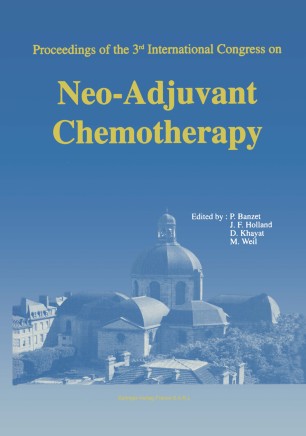 Proceedings of the 3rd International Congress on Neo-Adjuvant Chemotherapy

This book includes some selected presentations given at the 3rd International Congress on Neo-Adjuvant Chemotherapy which was held in Paris from February 6th to February 9th, 1991. It was attended by over 2000 physicians from around the world and by 700 nurses. Its organisation was saddened by the untimely death of Professor Claude Jacquillat on October 12th, 1990. It was further complicated in January and February 1991 by the gulf events which led some guests to cancel their participation. However with the outstanding help of the two presidents cho­ sen by Claude Jacquillat before his death, Pierre Banzet from Paris and James F. Holland from New York, the organizers could set up an exciting meeting confirming the impact of neo-adjuvant chemotherapy on relatively new indi­ cations such as non-small lung cancers, bladder cancer, esophagal cancer, cer­ vix cancer, etc ... It is noteworthy that a contradictory debate on primary chemotherapy in non-small lung cancer turned into a consensus conference. In breast cancer, the downstaging induced by primary chemotherapy is ack­ nowledged by all and the conviction that Jacquillat defended so heartily that breast preservation should be proposed to all patients with breast cancer what­ ever their tumour size is shared now by more and more people. A special emphasis was given to new drugs, new combination, new access (locoregional therapy) and new developments such as that of growth factors and of interleukin 2.