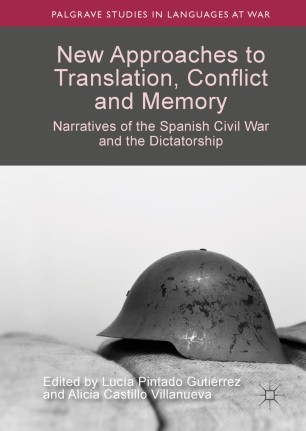 Narratives of the Spanish Civil War and the Dictatorship

‘This varied and well-documented set of case studies focused on translation and conflict in Spain supplements accounts of repression and censorship with innovative ideas drawn from memory studies, affording a contemporary political perspective on the dark days of the Franco era. ’
—Theo Hermans, Professor of Dutch and Comparative Literature, University College London, UK
‘Provocative, enlightening, groundbreaking, this volume is a compelling account and an intellectually engaging enquiry into translation as an activity that takes place not in a neutral site but within a political context with parties who have interests in the production of texts. It is thus an in-depth study of the challenges faced by translators during a particular historical episode. No doubt courageous, using numerous contemporary examples, it faces questions of dominance and resistance. Food for thought. ’
—África Vidal Claramonte, Professor of Translation Studies, University of Salamanca, Spain
This interdisciplinary edited collection establishes a new dialogue between translation, conflict and memory studies focusing on fictional texts, reports from war zones and audiovisual representations of the Spanish Civil War and the Franco Dictatorship. It explores the significant role of translation in transmitting a recent past that continues to resonate within current debates on how to memorialize this inconclusive historical episode. The volume combines a detailed analysis of well-known authors such as Langston Hughes and John Dos Passos, with an investigation into the challenges found in translating novels such as The Group by Mary McCarthy (considered a threat to the policies established by the dictatorial regime), and includes more recent works such as El tiempo entre costuras by María Dueñas. Further, it examines the reception of the translations and whether the narratives cross over effectively in various contexts. In doing so it provides an analysis of the landscape of the Spanish conflict and dictatorship in translation that allows for an intergenerational and transcultural dialogue. It will appeal to students and scholars of translation, history, literature and cultural studies.
Lucía Pintado Gutiérrez is Assistant Professor at the School of Applied Language and Intercultural Studies at Dublin City University, Ireland.
Alicia Castillo Villanueva is Assistant Professor of Spanish at the School of Applied Language and Intercultural Studies at Dublin City University, Ireland.