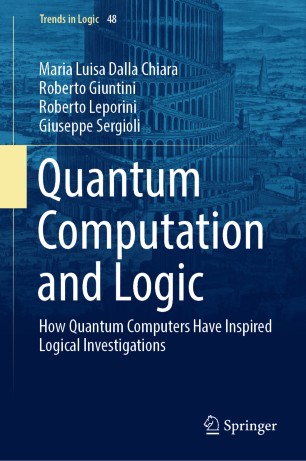 Part of the Trends in Logic book series (TREN, volume 48)

This book provides a general survey of the main concepts, questions and results that have been developed in the recent interactions between quantum information, quantum computation and logic. Divided into 10 chapters, the books starts with an introduction of the main concepts of the quantum-theoretic formalism used in quantum information. It then gives a synthetic presentation of the main “mathematical characters” of the quantum computational game: qubits, quregisters, mixtures of quregisters, quantum logical gates. Next, the book investigates the puzzling entanglement-phenomena and logically analyses the Einstein–Podolsky–Rosen paradox and introduces the reader to quantum computational logics, and new forms of quantum logic. The middle chapters investigate the possibility of a quantum computational semantics for a language that can express sentences like “Alice knows that everybody knows that she is pretty”, explore the mathematical concept of quantum Turing machine, and illustrate some characteristic examples that arise in the framework of musical languages. The book concludes with an analysis of recent discussions, and contains a Mathematical Appendix which is a survey of the definitions of all main mathematical concepts used in the book.