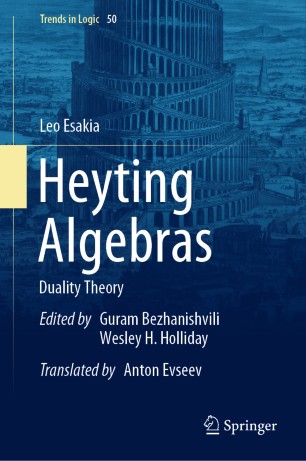 Part of the Trends in Logic book series (TREN, volume 50)

popular among Russian-speaking logicians. This translation helps make the ideas

The book discusses the theory of Heyting algebras and closure algebras, as

well as the corresponding intuitionistic and modal logics. The author introduces the

frames), resulting in the structures now known as Esakia spaces. The main theorems

include a duality between the categories of closure algebras and of hybrids, and a duality

between the categories of Heyting algebras and of so-called strict hybrids.

Esakia’s book was originally published in 1985. It was the first of a planned two-volume monograph

on Heyting algebras. But after the collapse of the Soviet Union, the publishing house

closed and the project died with it. Fortunately, this important work now lives on in

this accessible translation. The Appendix of the book discusses the planned contents

of the lost second volume.