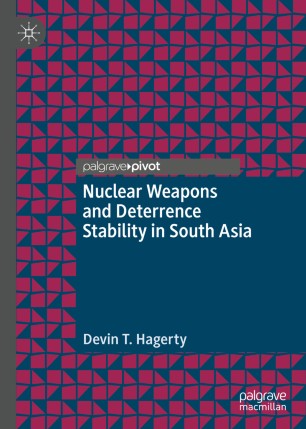 “This is a carefully argued, empirically sound and theoretically deft analysis of deterrence stability and its limits in South Asia. It provides appropriate details about the diplomatic and strategic postures of both India and Pakistan, and it discusses possible pathways for enhancing deterrence stability in the region.”

“In this compact volume, Devin Hagerty provides a multi-layered account that is both theoretically informed and empirically grounded. It will be essential reading for students, scholars, and practitioners interested in understanding the South Asian security environment and deterrence more generally.”

This book examines the theory and practice of nuclear deterrence between India and Pakistan, two highly antagonistic South Asian neighbors who recently moved into their third decade of overt nuclear weaponization. It assesses the stability of Indo-Pakistani nuclear deterrence and argues that, while deterrence dampens the likelihood of escalation to conventional—and possibly nuclear—war, the chronically embittered relations between New Delhi and Islamabad mean that deterrence failure resulting in major warfare cannot be ruled out. Through an empirical examination of the effects of nuclear weapons during five crises between India and Pakistan since 1998, as well as a discussion of the theoretical logic of Indo-Pakistani nuclear deterrence, the book offers suggestions for enhancing deterrence stability between these two countries.

Devin T. Hagerty is Professor of Political Science at the University of Maryland, Baltimore County, USA.