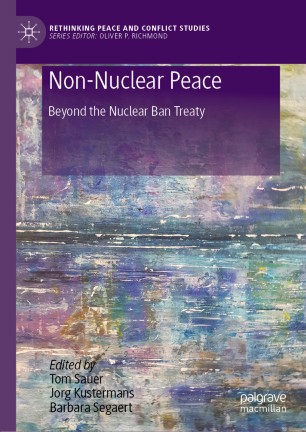 Beyond the Nuclear Ban Treaty

This volume examines the possibility of a world without nuclear weapons. It starts from the observation that, although nuclear deterrence has long been dominant in debates about war and peace, recent events show that ridicule and stigmatization of nuclear weapons and their possessors is on the rise. The idea of non-nuclear peace has been around since the beginning of the nuclear revolution, but it may be staging a return. The first part reconstructs the criticism of nuclear peace, both past and present, with a particular emphasis on technology. The second part focuses on the most revolutionary change since the beginning of the nuclear revolution, namely the Humanitarian Initiative and the resulting Nuclear Ban Treaty (2017), which allows imagining non-nuclear peace anew. The third and last part explores the practical and institutional prospects of a peace order without nuclear weapons. If non-nuclear peace advocates want to convince skeptics, they have to come up with practical solutions in the realm of global governance or world government.
Tom Sauer is Associate Professor in International Politics at the Universiteit Antwerpen, Belgium. He is co-editor of Nuclear Terrorism: Countering the Threat and author of Eliminating Nuclear Weapons: The Role of Missile Defense, Nuclear Inertia: US Nuclear Weapons Policy after the Cold War, and Nuclear Arms Control.
Jorg Kustermans teaches international politics in the Department of Political Science at the University of Antwerp, Belgium. His scholarship is situated at the intersection of international theory and social theory (state personhood, republican security, the nature of social practices). He is co-editor of Pacifism’s Appeal: Ethos, History, Politics (with Sauer T., Lootens D. & Segaert B.)
Barbara Segaert is a researcher in Oriental Studies, Islamic Studies and Arab Philology at KU Leuven, Belgium, and in the Social Sciences at the Open University, UK. Since 2002 she has been scientific coordinator at the University Centre Saint-Ignatius Antwerp, Belgium, where she develops academic programmes on various topics of contemporary relevance to society.