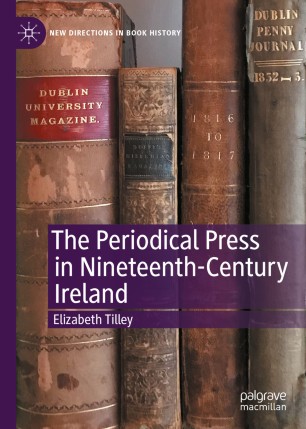 The Periodical Press in Nineteenth-Century Ireland

This book offers a new interpretation of the place of periodicals in nineteenth-century Ireland. Case studies of representative titles as well as maps and visual material (lithographs, wood engravings, title-pages) illustrate a thriving industry, encouraged, rather than defeated by the political and social upheaval of the century.

Titles examined include: The Irish Magazine, and Monthly Asylum for Neglected Biography and The Irish Farmers’ Journal, and Weekly Intelligencer; The Dublin University Magazine; Royal Irish Academy Transactions and Proceedings and The Dublin Penny Journal; The Irish Builder (1859-1979); domestic titles from the publishing firm of James Duffy; Pat and To-Day’s Woman.

The Appendix consists of excerpts from a series entitled ‘The Rise and Progress of Printing and Publishing in Ireland’ that appeared in The Irish Builder from July of 1877 to June of 1878. Written in a highly entertaining, anecdotal style, the series provides contemporary information about the Irish publishing industry.