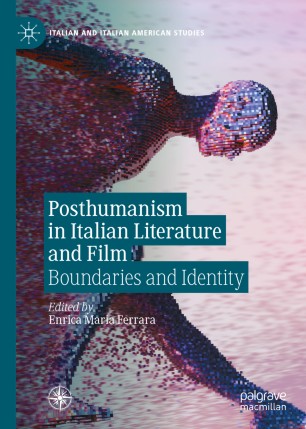 Posthumanism in Italian Literature and Film

Italian contribution to contemporary debates on the posthuman. The contributors

to Posthumanism in Italian Literature and Film: Boundaries and Identity show how

Film expands the canon of posthumanist literary studies, enriching it with

unexpected topics and voices. In a dazzling sequence of chapters on Leopardi,

of contemporary storytellers and filmmakers, the authors of this fascinating book

follow the human as it emerges from a tangle of organic and inorganic substances,

An engaging read, it is yet another testimony to the established presence of

Italian culture on the scene of posthumanities.’

As humans re-negotiate their boundaries with the nonhuman world of animals,

inanimate entities and technological artefacts, new identities are formed and a

new epistemological and ethical approach to reality is needed. Through twelve

thought-provoking, scholarly essays, this volume analyzes works by a range of

modern and contemporary Italian authors, from Giacomo Leopardi to Elena

Ferrante, who have captured the shift from anthropocentrism and postmodernism

to posthumanism. Indeed, this is the first academic volume investigating narrative

configurations of posthuman identity in Italian literature and film.