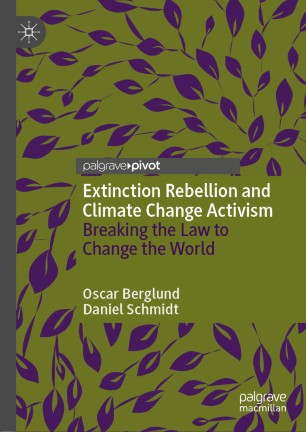 Breaking the Law to Change the World

This book summarises and critiques Extinction Rebellion (XR) as a social movement organisation, engaging with key issues surrounding its analysis, strategy and tactics. The authors suggest that XR have an underdeveloped and apolitical view of the kind of change necessary to address climate change, and suggest that while this enables the building of broad movements, it is also an obstacle to achieving the systemic change that they are aiming for.

The book analyses different forms of protest and the role of civil disobedience in their respective success or failure; democratic demands and practices; and activist engagement with the political economy of climate change. It engages with a range of theoretical perspectives that address law-breaking in protest and participatory forms of democracy including liberal political theory; anarchism and forms of historical materialism, and will be of interest to students and scholars across politics, international relations, sociology, policy studies and geography, as well as those interested in climate change politics and activism.

Oscar Berglund is Lecturer in International Public and Social Policy at the University of Bristol, UK.

Daniel Schmidt is a MSc graduate in Public Policy from the University of Bristol, UK.