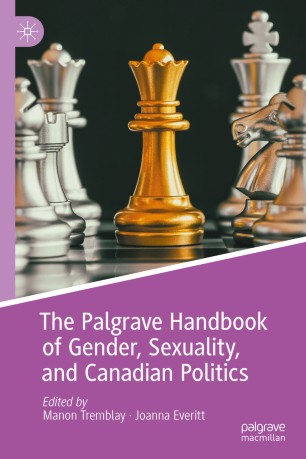 The Palgrave Handbook of Gender, Sexuality, and Canadian Politics

The Palgrave Handbook of Gender, Sexuality, and Canadian Politics offers the first and only handbook in the field of Canadian politics that uses 'gender' (which it interprets broadly, as inclusive of sex, sexualities, and other intersecting identities) as its category of analysis. Its premise is that political actors’ identities frame how Canadian politics is thought, told, and done; in turn, Canadian politics, as a set of ideas, state institutions and decision-making processes, and civil society mobilizations, does and redoes gender. Following the standard structure of mainstream introductory Canadian politics textbooks, this handbook is divided into four sections (ideologies, institutions, civil society, and public policy) each of which contains several chapters on topics commonly taught in Canadian politics classes. The originality of the handbook lies in its approach: each chapter reviews the basics of a given topic from the perspective of gendered/sexualized and other intersectional identities. Such an approach makes the handbook the only one of its kind in Canadian Politics.
Manon Tremblay is Professor in the School of Political Studies at the University of Ottawa, Canada.

Joanna Everitt is Professor of Political Science at the University of New Brunswick in Saint John, Canada.