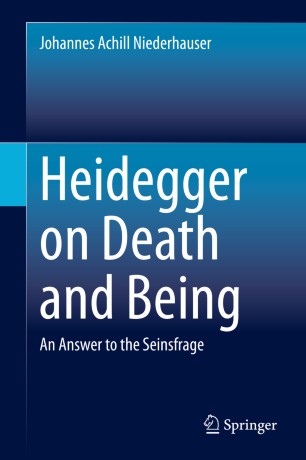 An Answer to the Seinsfrage

The book offers challenging interpretations of crucial moments of Heidegger’s philosophy such as aletheia, the history of being, time, technology, the fourfold, mortality, the meaning of existence, the event, and language. Niederhauser makes the case that any reading of Heidegger that ignores death cannot fully understand those concepts.

The book argues that death is central to Heidegger’s “thinking path” from the early 1920s until his late post-war philosophy. The book thus attempts to show that there is a unity of the early and late Heidegger often ignored by other commentators.  Niederhauser argues that death is the fulcrum of Heidegger’s ontology and the turning point of the history of being.  Death resurfaces at the most crucial moments of the “thinking path” – from beginning to end.

The book is of interest to those invested in current debates on the ethics of dying and the transhumanist project of digital human immortality. The text also shows that for Heidegger philosophy means first and foremost to learn how to die.

This volume speaks to continental and analytical philosophers and students alike as it draws on a number of diverse Heidegger interpretations and appreciates intercultural differences in reading Heidegger.