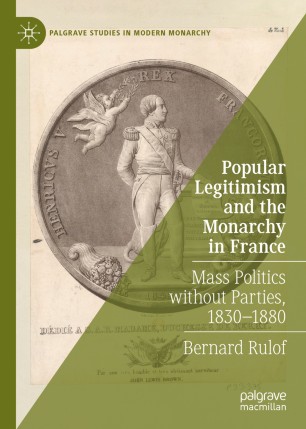 Popular Legitimism and the Monarchy in France

This book explores mid-nineteenth-century French legitimism and the implications of popular support for a movement that has traditionally been portrayed as an aristocratic force intent on restoring the Old Regime. This type of monarchism has often been understood as a form of elitist patronage politics or, alternatively, identified with ultramontane Catholicism. Although historians have offered a more nuanced view in the last few decades, their work, nevertheless, has predominantly focused on legitimist leaders rather than their followers and their professed feelings of loyalty to monarchy and monarch. This book’s originality therefore is twofold: firstly as an analysis of popular rather than élite monarchism; and secondly, as a study which portrays this form of royalism as a political movement characteristic of a period which saw the emergence of mass politics, while parties were still non-existent. It not only discusses the social and cultural settings of (popular) monarchism, but also contributes to the history of political parties, citizenship and democracy.