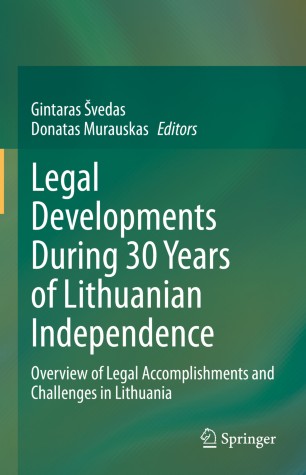 Overview of Legal Accomplishments and Challenges in Lithuania

This volume provides an overview of selected major areas of legal and institutional development in Lithuania since the Restoration of Independence in 1990. The respective chapters discuss changes in fields varying from the constitutional framework to criminal law and procedure. The content highlights four major aspects of the fundamental changes that have affected the entire legal system: the Post-Soviet country’s complex historical heritage; socio-political and other conditions in the process of adopting new (rule of law) standards; international legal influences on the national legal order over the past 30 years; and finally, the search for entirely new national legal models.

Over a period of 30 years since gaining its independence from the Soviet Union, Lithuania has undergone unique social changes. The state restarted its independent journey burdened by the complicated heritage of the Soviet legal system. Some major reforms have taken place swiftly, while others have required years of thorough analysis of societal needs and the search for optimal examples in other states. The legal system is now substantially different, with some elements being entirely new, and others adapted to present needs.