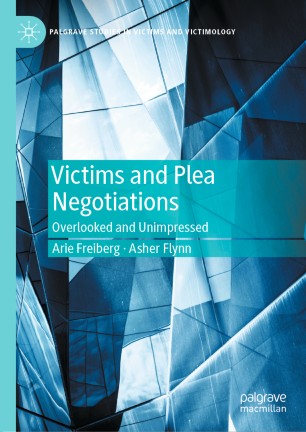 “This comprehensive and meticulously documented book fills a serious gap in available research on victim participation in plea bargaining. It provides a wide-ranging review and analysis including stakeholders’ perspectives and related laws from Australia, New Zealand, the US and the UK. Its most significant contribution is the vivid account of victims’ secondary victimization as they navigate this legal institution, prosecutors’ approaches to victims and the disempowering impact that plea bargaining decision-making processes and outcomes have on victims.”

“Plea bargaining is the black box of criminal justice decision-making, hidden from the public and victims. In this important study of victims’ reactions to plea bargaining, Freiberg and Flynn expertly prize open the plea bargaining box for victims by asking them about their experiences. Criminal justice systems worldwide have allowed efficiency to become their super paradigm. This book is a timely reminder about the importance of recognizing that victims are the proxy for the communities they serve and protect.”

This book explores victim’s views of plea negotiations and the level of input that they desire. It draws on the empirical findings of the first in-depth study of victims and plea negotiations conducted in Australia. Over the last 50 years, the criminal justice system has seen a major change in the role that victims play in the justice process with the vast majority of criminal cases resolve through guilty pleas, many resulting from plea negotiations. The extent to which the victim is one of the participating parties in the proceedings is a question of law and of practice. Drawing from focus groups and surveys with victims of crime, Victims and Plea Negotiations seeks to privilege victims’ voices and lived experiences of plea negotiations, to present their perspectives on five options for enhanced participation in the plea negotiation process. This book appeals to academics and students in the areas of law, criminology, sociology, victimology and legal studies, those who practice in the criminal justice system generally, those who work with victims, and policy makers.

Arie Freiberg is Emeritus Professor at Monash University, Australia. He holds adjunct positions with the Sir Zelman Cowen Centre, Victoria University, Melbourne, and the Australia and New Zealand School of Government, and he has published over 180 publications.

Asher Flynn is Associate Professor of Criminology at Monash University, Australia. She is a leading international researcher in policy and prevention concerning gendered and sexual violence, and AI and technology-facilitated abuse. Asher has published 6 books, including Plea Negotiations: Pragmatic Justice In An Imperfect World (2018) with Arie Freiberg.