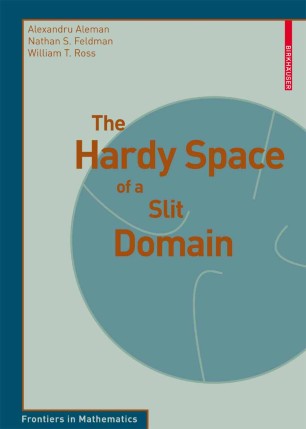 The Hardy Space of a Slit Domain

Part of the Frontiers in Mathematics book series (FM)

If H is a Hilbert space and T : H ? H is a continous linear operator, a natural question to ask is: What are the closed subspaces M of H for which T M ? M? Of course the famous invariant subspace problem asks whether or not T has any non-trivial invariant subspaces. This monograph is part of a long line of study of the invariant subspaces of the operator T = M (multiplication by the independent variable z, i. e. , M f = zf )on a z z Hilbert space of analytic functions on a bounded domain G in C. The characterization of these M -invariant subspaces is particularly interesting since it entails both the properties z of the functions inside the domain G, their zero sets for example, as well as the behavior of the functions near the boundary of G. The operator M is not only interesting in its z own right but often serves as a model operator for certain classes of linear operators. By this we mean that given an operator T on H with certain properties (certain subnormal operators or two-isometric operators with the right spectral properties, etc. ), there is a Hilbert space of analytic functions on a domain G for which T is unitarity equivalent to M .