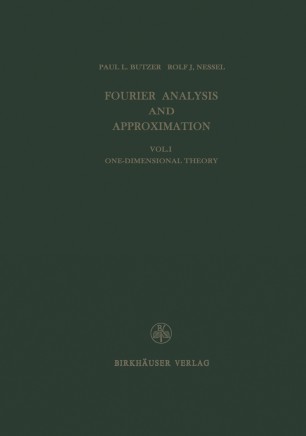 At the international conference on 'Harmonic Analysis and Integral Transforms', conducted by one of the authors at the Mathematical Research Institute in Oberwolfach (Black Forest) in August 1965, it was felt that there was a real need for a book on Fourier analysis stressing (i) parallel treatment of Fourier series and Fourier trans­ forms from a transform point of view, (ii) treatment of Fourier transforms in LP(lRn)_ space not only for p = 1 and p = 2, (iii) classical solution of partial differential equations with completely rigorous proofs, (iv) theory of singular integrals of convolu­ tion type, (v) applications to approximation theory including saturation theory, (vi) multiplier theory, (vii) Hilbert transforms, Riesz fractional integrals, Bessel potentials, (viii) Fourier transform methods on locally compact groups. This study aims to consider these aspects, presenting a systematic treatment of Fourier analysis on the circle as well as on the infinite line, and of those areas of approximation theory which are in some way or other related thereto. A second volume is in preparation which goes beyond the one-dimensional theory presented here to cover the subject for functions of several variables. Approximately a half of this first volume deals with the theories of Fourier series and of Fourier integrals from a transform point of view.