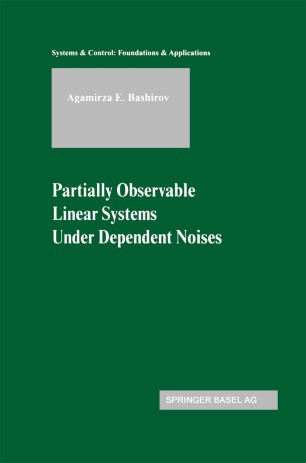 Noise is a rich concept playing an underlying role in human activity. Consideration of the noise phenomenon in arts and sciences, respectively, makes the distinction between both domains more obvious. Artists create "deliberate noise"'; the masterpieces of literature, music, modern fine art etc. are those where a clear idea, traditionally related to such concepts as love, is presented under a skilful veil of "deliberate noise". On the contrary, sciences fight against noise; a scientific discovery is a law of nature extracted from a noisy medium and refined.
This book discusses the methods of fighting against noise. It can be regarded as a mathematical view of specific engineering problems with known and new methods of control and estimation in noisy media.
The main feature of this book is the investigation of stochastic optimal control and estimation problems with the noise processes acting dependently on the state (or signal) and observation systems. While multiple early and recent findings on the subject have been obtained and challenging problems remain to be solved, this subject has not yet been dealt with systematically nor properly investigated. The discussion is given for infinite dimensional systems, but within the linear quadratic framework for continuous and finite time horizon. In order to make this book self-contained, some background material is provided.
Consequently, the target readers of this book are both applied mathematicians and theoretically oriented engineers who are designing new technology, as well as students of the related branches. The book may also be used as a reference manual in that part of functional analysis that is needed for problems of infinite dimensional linear systems theory.