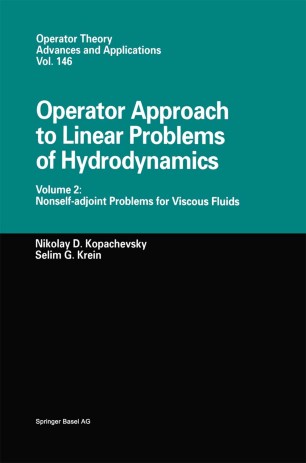 As mentioned in the Introduction to Volume I, the present monograph is intended both for mathematicians interested in applications of the theory of linear operators and operator-functions to problems of hydrodynamics, and for researchers of applied hydrodynamic problems, who want to study these problems by means of the most recent achievements in operator theory. The second volume considers nonself-adjoint problems describing motions and normal oscillations of a homogeneous viscous incompressible fluid. These ini­ tial boundary value problems of mathematical physics include, as a rule, derivatives in time of the unknown functions not only in the equation, but in the boundary conditions, too. Therefore, the spectral problems corresponding to such boundary value problems include the spectral parameter in the equation and in the bound­ ary conditions, and are nonself-adjoint. In their study, we widely used the theory of nonself-adjoint operators acting in a Hilbert space and also the theory of operator pencils. In particular, the methods of operator pencil factorization and methods of operator theory in a space with indefinite metric find here a wide application. We note also that this volume presents both the now classical problems on oscillations of a homogeneous viscous fluid in an open container (in an ordinary state and in weightlessness) and a new set of problems on oscillations of partially dissipative hydrodynamic systems, and problems on oscillations of a visco-elastic or relaxing fluid. Some of these problems need a more careful additional investigation and are rather complicated.