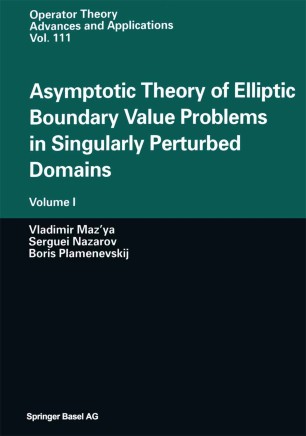 For the first time in the mathematical literature this two-volume work introduces a unified and general approach to the asymptotic analysis of elliptic boundary value problems in singularly perturbed domains. This first volume is devoted to domains whose boundary is smooth in the neighborhood of finitely many conical points. In particular, the theory encompasses the important case of domains with small holes. The second volume, on the other hand, treats perturbations of the boundary in higher dimensions as well as nonlocal perturbations.
The core of this book consists of the solution of general elliptic boundary value problems by complete asymptotic expansion in powers of a small parameter that characterizes the perturbation of the domain. The construction of this method capitalizes on the theory of elliptic boundary value problems with nonsmooth boundary that has been developed in the past thirty years.
Much attention is paid to concrete problems in mathematical physics, for example in elasticity theory. In particular, a study of the asymptotic behavior of stress intensity factors, energy integrals and eigenvalues is presented.
To a large extent the book is based on the authors’ work and has no significant overlap with other books on the theory of elliptic boundary value problems.