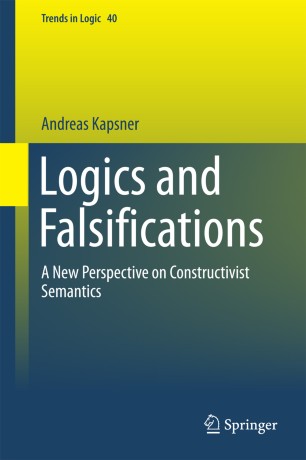 A New Perspective on Constructivist Semantics

Part of the Trends in Logic book series (TREN, volume 40)

This volume examines the concept of falsification as a central notion of semantic theories and its effects on logical laws. The point of departure is the general constructivist line of argument that Michael Dummett has offered over the last decades. From there, the author examines the ways in which falsifications can enter into a constructivist semantics, displays the full spectrum of options, and discusses the logical systems most suitable to each one of them. While the idea of introducing falsifications into the semantic account is Dummett's own, the many ways in which falsificationism departs quite radically from verificationism are here spelled out in detail for the first time.

The volume is divided into three large parts. The first part provides important background information about Dummett’s program, intuitionism and logics with gaps and gluts. The second part is devoted to the introduction of falsifications into the constructive account, and shows that there is more than one way in which one can do this. The third part details the logical effects of these various moves. In the end, the book shows that the constructive path may branch in different directions: towards intuitionistic logic, dual intuitionistic logic and several variations of Nelson logics. The author argues that, on balance, the latter are the more promising routes to take.

n into formal logic. This is a fascinating logico-philosophical investigation, which will interest non-classical logicians of all stripes."