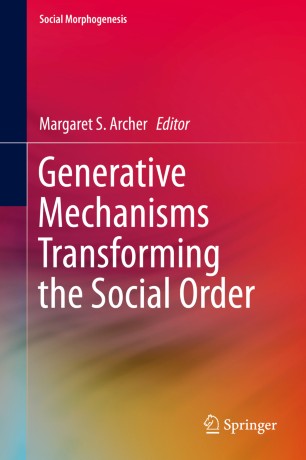 This volume examines how generative mechanisms emerge in the social order and their consequences. It does so in the light of finding answers to the general question posed in this book series: Will Late Modernity be replaced by a social formation that could be called Morphogenic Society? This volume clarifies what a ‘generative mechanism’ is, to achieve a better understanding of their social origins, and to delineate in what way such mechanisms exert effects within a current social formation, either stabilizing it or leading to changes potentially replacing it . The book explores questions about conjuncture, convergence and countervailing effects of morphogenetic mechanisms in order to assess their impact. Simultaneously, it looks at how products of positive feedback intertwine with the results of (morphostatic) negative feedback. This process also requires clarification, especially about the conditions under which morphostasis prevails over morphogenesis and vice versa. It raises the issue as to whether their co-existence can be other than short-lived. The volume addresses whether or not there also is a process of ‘morpho-necrosis’, i.e. the ultimate demise of certain morphostatic mechanisms, such that they cannot ‘recover’. The book concludes that not only are generative mechanisms required to explain associations between variables involved in the replacement of Late Modernity by Morphogenic Society, but they are also robust enough to account for cases and times when such variables show no significant correlations.