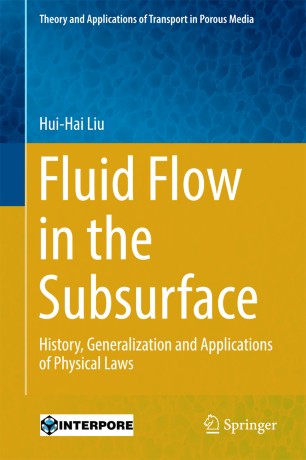 Fluid Flow in the Subsurface

Part of the Theory and Applications of Transport in Porous Media book series (TATP, volume 28)

This book presents a systematic attempt to generalize several fundamental physical laws related to subsurface fluid flow that are important for a number of contemporary applications in the areas of hydrogeology, reservoir engineering and rock mechanics. It also covers the history of discovering these physical laws, their respective scope of validity, and their generalizations or extensions.

The physical laws discussed include Darcy’s law, Darcy-Buckingham law and Hooke’s law. Darcy’s law is the fundamental law for subsurface fluid flow. For low-permeability media, it is not always adequate because of the strong fluid–solid interaction. Though the Darcy-Buckingham law is often used for modeling subsurface multiphase flow, it is only valid under the local equilibrium condition. This condition does not hold in many cases, especially when fingering flow occurs. It is well known that subsurface fluid flow is coupled with mechanical deformation of subsurface media; in some applications, this coupling can play a dominant role. The continuum-scale elastic deformation of natural rock, however, does not always follow the traditional form of Hooke’s law.

The book also presents applications of the proposed generalizations of the physical laws to several important engineering projects.