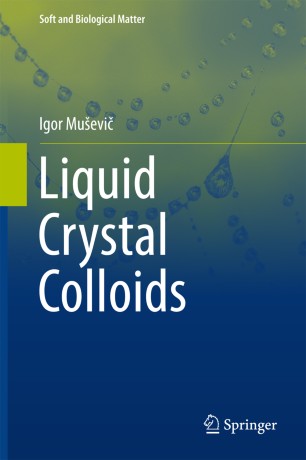 Part of the Soft and Biological Matter book series (SOBIMA)

This book brings together the many concepts and discoveries in liquid crystal colloids contributed over the last twenty years and scattered across numerous articles and book chapters. It provides both a historical overview of the development of the field and a clear perspective on the future applications in photonics.

The book covers all phenomena observed in liquid crystal colloids with an emphasis on experimental tools and applications of topology in condensed matter, as well as practical micro-photonics applications. It includes a number of spectacular manifestations of new topological phenomena not found or difficult to observe in other systems. Starting from the early works on nematic colloids, it explains the basics of topological defects in ordered media, charge and winding, and the elastic forces between colloidal particles in nematics. Following a detailed description of experimental methods, such as optical tweezing and particle tracking, the book eases the reader into the theoretical part, which deals with elastic deformation of nematic liquid crystals due to inclusions and surface alignment. This is discussed in the context of basic mean field Landau-de Gennes Q-tensor theory, with a brief explanation of the free-energy minimization numerical methods. There then follows an excursion into the topology of complex nematic colloidal structures, colloidal entanglement, knotting and linking. Nematic droplets, shells, handlebodies and chiral topological structures are addressed in separate chapters. The book concludes with an extensive chapter on the photonic properties of nematic dispersions, presenting the concept of integrated soft matter photonics and discussing the concepts of nematic and chiral nematic microlasers, surface-sensitive photonic devices and smectic microfibers.

The text is complemented by a large bibliography, explanatory sketches and beautiful micrographs.