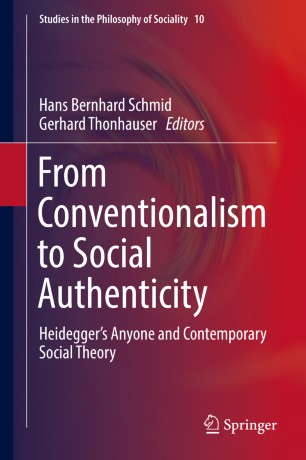 From Conventionalism to Social Authenticity

Heidegger’s Anyone and Contemporary Social Theory

Part of the Studies in the Philosophy of Sociality book series (SIPS, volume 10)

This edited volume offers a new approach to understanding social conventions by way of Martin Heidegger. It connects the philosopher's conceptions of the anyone, everydayness, and authenticity with an analysis and critique of social normativity. Heidegger’s account of the anyone is ambiguous. Some see it as a good description of human sociality, others think of it as an important critique of modern mass society. This volume seeks to understand this ambiguity as reflecting the tension between the constitutive function of conventions for human action and the critical aspects of conformism. It argues that Heidegger’s anyone should neither be reduced to its pejorative nor its constitutive dimension. Rather, the concept could show how power and norms function.

This volume would be of interest to scholars and students of philosophy and the social sciences who wish to investigate the social applications of the works of Martin Heidegger.