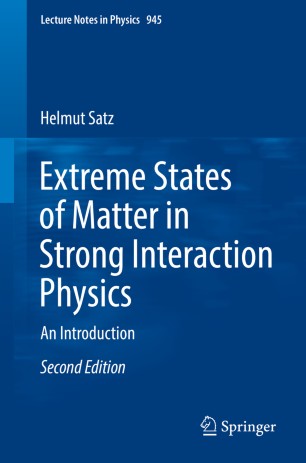 This book is a course-tested primer on the thermodynamics of strongly interacting matter – a profound and challenging area of both theoretical and experimental modern physics. Analytical and numerical studies of statistical quantum chromodynamics provide the main theoretical tool, while in experiments, high-energy nuclear collisions are the key for extensive laboratory investigations. As such, the field straddles statistical, particle and nuclear physics, both conceptually and in the methods of investigation used.

The book addresses, above all, the many young scientists starting their scientific research in this field, providing them with a general, self-contained introduction that highlights the basic concepts and ideas and explains why we do what we do. Much of the book focuses on equilibrium thermodynamics: first it presents simplified phenomenological pictures, leading to critical behavior in hadronic matter and to a quark-hadron phase transition. This is followed by elements of finite temperature lattice QCD and an exposition of the important results obtained through the computer simulation of the lattice formulation. It goes on to clarify the relationship between the resulting critical behavior due to symmetry breaking/restoration in QCD, before turning to the QCD phase diagram. The presentation of bulk equilibrium thermodyamics is completed by studying the properties of the quark-gluon plasma as a new state of strongly interacting matter. The final chapters of the book are devoted to more specific topics that arise when nuclear collisions are considered as a tool for the experimental study of QCD thermodynamics. This second edition includes a new chapter on the hydrodynamic evolution of the medium produced in nuclear collisions. Since the study of flow for strongly interacting fluids has gained ever-increasing importance over the years, it is dealt with it in some detail, including comments on gauge/gravity duality. Moreover, other aspects of experimental studies are brought up to date, such as the search for critical behavior in multihadron production, the calibration of quarkonium production in nuclear collisions, and the relation between strangeness suppression and deconfinement.