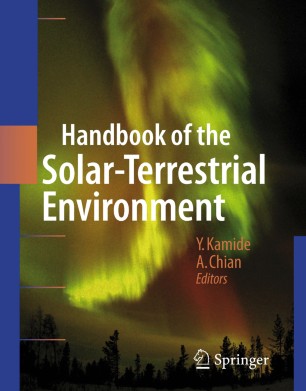 Handbook of the Solar-Terrestrial Environment

As a star in the universe, the Sun is constantly releas- cover a wide range of time and spatial scales, making ?? ing energy into space, as much as ?. ? ?? erg/s. Tis observations in the solar-terrestrial environment c- energy emission basically consists of three modes. Te plicated and the understanding of processes di?cult. ?rst mode of solar energy is the so-called blackbody ra- In the early days, the phenomena in each plasma diation, commonly known as sunlight, and the second region were studied separately, but with the progress mode of solar electromagnetic emission, such as X rays of research, we realized the importance of treating and UV radiation, is mostly absorbed above the Earth’s the whole chain of processes as an entity because of stratosphere. Te third mode of solar energy emission is strong interactions between various regions within in the form of particles having a wide range of energies the solar-terrestrial system. On the basis of extensive from less than ? keV to more than ? GeV. It is convenient satellite observations and computer simulations over to group these particles into lower-energy particles and thepasttwo decades, it hasbecomepossibleto analyze higher-energy particles, which are referred to as the so- speci?cally the close coupling of di?erent regions in the lar wind and solar cosmic rays, respectively. solar-terrestrial environment.