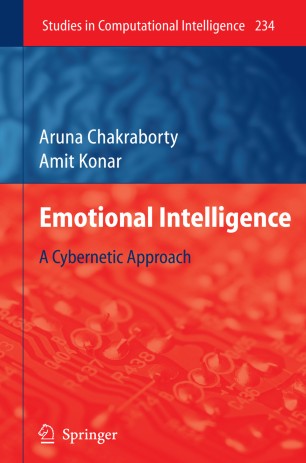 Emotional Intelligence is a new discipline of knowledge, dealing with modeling, recognition and control of human emotions. The book Emotional Intelligence: A Cybernetic Approach, to the best of the authors’ knowledge is a first comprehensive text of its kind that provides a clear introduction to the subject in a precise and insightful writing style. It begins with a philosophical introduction to Emotional Intelligence, and gradually explores the mathematical models for emotional dynamics to study the artificial control of emotion using music and videos, and also to determine the interactions between emotion and logic from the points of view of reasoning. The later part of the book covers the chaotic behavior of co-existing emotions under certain conditions of emotional dynamics. Finally, the book attempts to cluster emotions using electroencephalogram signals, and demonstrates the scope of application of emotional intelligence in several engineering systems, such as human-machine interfaces, psychotherapy, user assistance systems, and many others.

The book includes nine chapters. Chapter 1 provides an introduction to the subject from a philosophical and psychological standpoint. It outlines the fundamental causes of emotion arousal, and typical characteristics of the phenomenon of an emotive experience. The relation between emotion and rationality of thoughts is also introduced here. Principles of natural regulation of emotions are discussed in brief, and the biological basis of emotion arousal using an affective neuro-scientific model is introduced next. Scope of mathematical modeling to study the dynamics of emotion is also discussed. Principles of controlling emotion by artificial means, and the effect of emotion modeling on human-machine interactions are also outlined.