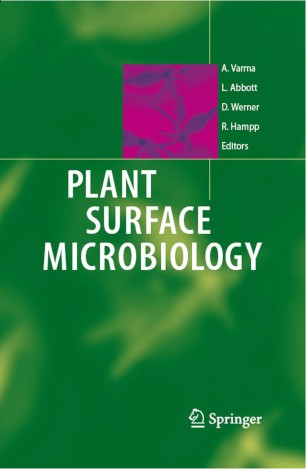 Most plants strongly rely on the co-existence with microorganisms: both groups benefit from these symbioses. It has been shown that a large number of specific genes in plants and microorganisms are only activated during these interactions. Of course, various microbes also act as pathogens.

Interactions between plants and microorganisms are often located on plant surfaces, such as leaf cuticles, seeds and mainly on the roots. The communication between plants and microbes is the main topic treated in Plant Surface Microbiology. The text discusses the signaling within a symbiosis or the molecular differences between symbiotic and pathogenic microorganisms, the role of microorganisms in growth and development of plants or in plant protection against deleterious agents and the interactions of microbes with genetically modified plants. Further contributions are devoted to: the analysis of bacterial communities in the rhizosphere; microbial population genetics; various aspects of mycorrhizal symbiosis; functional genomic approaches and the use of microorganisms as bio-indicator of soil disturbance.