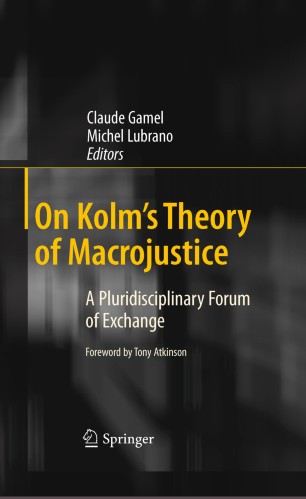 A Pluridisciplinary Forum of Exchange

The "Theory of Macrojustice”, introduced by S.-C. Kolm, is a stimulating contribution to the debate on the macroeconomic income distribution. The solution called “Equal Labour Income Equalisation” (ELIE) is the result of a three stages construction: collective agreement on the scheme of labour income redistribution, collective agreement on the degree of equalisation to be chosen in that framework, individual freedom to exploit his--her personal productive capicities (the source of labour income and the sole basis for taxation). This book is organised as a discussion around four complementary themes: philosophical aspects of macrojustice, economic analysis of macrojustice, combination of ELIE with other targeted tranfers, econometric evaluations of ELIE.