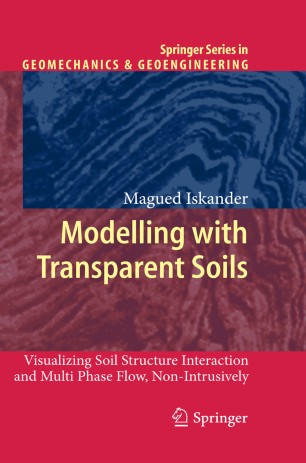 The fundamental premise of this monograph is that transparent synthetic materials with geotechnical properties similar to those of natural soils can be used to study 3D deformation and flow problems in natural soils. Transparent soils can be made by matching the refractive index of synthetic soil materials and the pore fluid. This monographs presents the geotechnical behaviour of several families of transparent soils that can be combined to meet model-test requirements, in terms of strength, deformation, or permeability.

"Modelling with Transparent Soils" demonstrates how an optical system consisting of a laser light, a CCD camera, a frame grabber, and a PC can be used to measure spatial deformations in transparent soil models non-intrusively. Transparent soil models are sliced optically using a laser light sheet. A distinctive speckle pattern is generated by the interaction of the laser light and transparent soil. A 2D deformation field is obtained from two speckle images by using an image processing technique named adaptive cross-correlation, which is an advanced form of the digital image cross-correlation (DIC) algorithm that utilizes both window sizing and window shifting methods. The monograph demonstrates that comparison of 2D deformation fields between transparent soil and natural soil showed that the results were comparable in almost every aspect. Three dimensional fields can be produced by combining multiple 2D fields in Matlab.