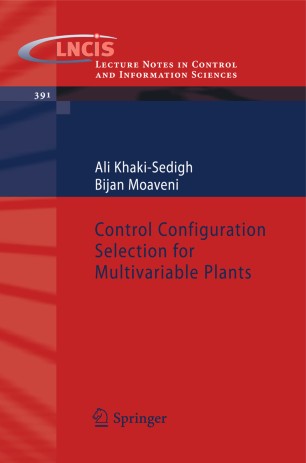 Control of multivariable industrial plants and processes has been a challenging and fascinating task for researchers in this field. The analysis and design methodologies for multivariable plants can be categorized as centralized and decentralized design strategies. Despite the remarkable theoretical achievements in centralized multiva- able control, decentralized control is still widely used in many industrial plants. This trend in the beginning of the third millennium is still there and it will be with us for the foreseeable future. This is mainly because of the easy implementation, main- nance, tuning, and robust behavior in the face of fault and model uncertainties, which is reported with the vast number of running decentralized controllers in the industry. The main steps involved in employing decentralized controllers can be summarized as follows: • Control objectives formulation and plant modeling. • Control structure selection. • Controller design. • Simulation or pilot plant experiments and Implementation. Nearly all the textbooks on multivariable control theory deal only with the control system analysis and design. The important concept of control structure selection which is a key prerequisite for a successful industrial control strategy is almost unnoticed. Structure selection involves the following two main steps: • Inputs and outputs selection. • Control configuration selection or the input-output pairing problem. This book focuses on control configuration selection or the input-output pairing problem, which is defined as the procedure of selecting the appropriate input and output pair for the design of SISO (or block) controllers.