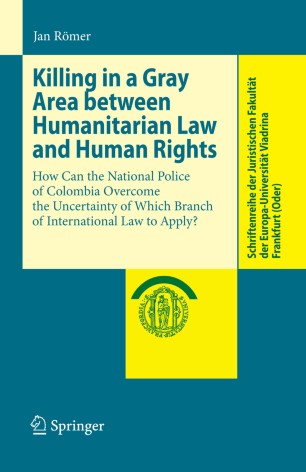 Killing in a Gray Area between Humanitarian Law and Human Rights

How Can the National Police of Colombia Overcome the Uncertainty of Which Branch of International Law to Apply?

Armed forces can be confronted with the problem of correctly classifying a targeted group as one that is or is not party to an armed conflict. In particular, this happens in a context of a high level of violence where a non-international armed conflict is (likely) occurring at the same time, such as in Iraq, Afghanistan, Brazil or Mexico. The difficulty of qualifying the targeted group leads to a legal uncertainty in which it is unclear whether an operation is governed by international humanitarian law or the international law of human rights. The problem is of particular interest when lethal force is resorted to, as killing might be illegal under one of the two branches. The book attempts to provide guidance on how this uncertainty can be overcome. In order to do so, the requirements to kill under IHL and human rights law are analyzed and compared, as well as assessed in concrete operations of the National Police of Colombia who face this problem on a regular basis.