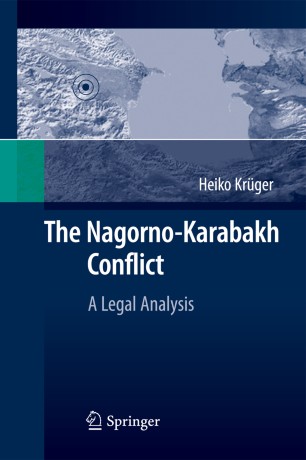 Dr. Heiko Krüger is an attorney at law and commentator on international and European legal affairs in Berlin, Germany. His research interests include secession conflicts, conflict resolution, the conduct of states and the implications of such action. Dr. Krüger is particularly concerned with secession conflicts in the Caucasus region and the Kosovo case. After obtaining his doctorate in law, he worked as a legal clerk at the German Ministry of Foreign Affairs and the Scientific Department of the German Parliament. He has served as a member of the Ethics Committee of the State of Berlin since 2006. This treatise is primarily concerned with the legal aspects of the Nagorno-Karabakh conflict. Current developments make it clear that the juristic aspects of secession conflicts are successively becoming blurred. Also, their significance is being superseded within the framework of conflict resolution attempts. The controversial recognition of Kosovo by several states in 2008 as well as the equally questionable recognition of Abkhazia and South Ossetia by Russia are merely two aspects. The aim of this treatise is therefore to focus more strongly on the legal positions, and in particular to underline the importance of principles of international law in connection with the Nagorno-Karabakh conflict. The analysis concentrates on two aspects of the Nagorno-Karabakh conflict. On the one hand the legitimacy or illegitimacy of the secession of Nagorno-Karabakh is scrutinised in accordance with Soviet law and international law. In this respect, the current developments in the cases of Kosovo, Abkhazia and South Ossetia are also taken into account. On the other hand, insight is provided into how the conduct of the Republic of Armenia is to be assessed from an international law perspective.