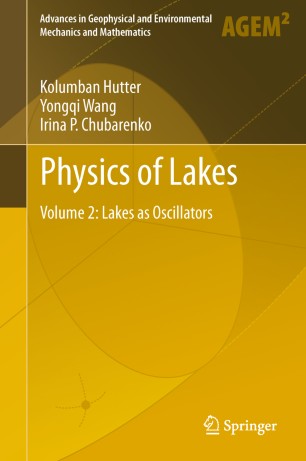 Part of the Advances in Geophysical and Environmental Mechanics and Mathematics book series (AGEM, volume 2)

The overwhelming focus of this 2nd volume of “Physics of Lakes” is adequately expressed by its subtitle “Lakes as Oscillators”. It deals with barotropic and baroclinic waves in homogeneous and stratified lakes on the rotating Earth and comprises 12 chapters, starting with rotating shallow-water waves, demonstrating their classification into gravity and Rossby waves for homogeneous and stratified water bodies. This leads to gravity waves in bounded domains of constant depth, Kelvin, Poincaré and Sverdrup waves, reflection of such waves in gulfs and rectangles and their description in sealed basins as barotropic ‘inertial waves proper’. The particular application to gravity waves in circular and elliptical basins of constant depth leads to the description of Kelvin-type and Poincaré-type waves and their balanced description in basins of arbitrary geometry on the rotating Earth. Consideration of two-, three- and n-layer fluids with sharp interfaces give rise to the description of gravity waves of higher order baroclinicity with experimental corroboration in a laboratory flume and e.g. in Lake of Lugano, Lake Banyoles and Lake Biwa. Barotropic wave modes in Lake Onega with complex geometry show that data and computational output require careful interpretation. Moreover, a summer field campaign in Lake of Lugano and its two-layer modal analysis show that careful statistical analyses of the data are requested to match data with computational results. Three chapters are devoted to topographic Rossby waves. Conditions are outlined for which these waves are negligibly affected by baroclinicity. Three classes of these large period modes are identified: channel modes, so-called Ball modes and bay modes, often with periods which lie very close together. The last chapter deals with an entire class of Chrystal-type equations for barotropic waves in elongated basins which incorporate the effects of the rotation of the Earth.