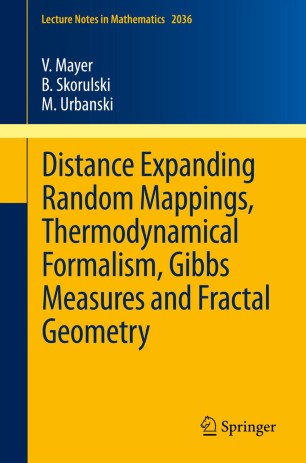 The theory of random dynamical systems originated from stochastic
differential equations. It is intended to provide a framework and
techniques to describe and analyze the evolution of dynamical
systems when the input and output data are known only approximately, according to some probability distribution. The development of this field, in both the theory and applications, has gone in many directions. In this manuscript we introduce measurable expanding random dynamical systems, develop the thermodynamical formalism and establish, in particular, the exponential decay of correlations and analyticity of the expected pressure although the spectral gap property does not hold. This theory is then used to investigate fractal properties of conformal random systems. We prove a Bowen’s formula and develop the multifractal formalism of the Gibbs states. Depending on the behavior of the Birkhoff sums of the pressure function we arrive at a natural classification of the systems into two classes: quasi-deterministic systems, which share many
properties of deterministic ones; and essentially random systems, which are rather generic and never bi-Lipschitz equivalent to deterministic systems. We show that in the essentially random case the Hausdorff measure vanishes, which refutes a conjecture by Bogenschutz and Ochs. Lastly, we present applications of our results to various specific conformal random systems and positively answer a question posed by Bruck and Buger concerning the Hausdorff dimension of quadratic random Julia sets.