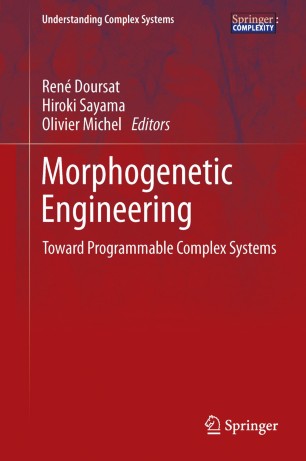 Generally, spontaneous pattern formation phenomena are random and repetitive, whereas elaborate devices are the deterministic product of human design. Yet, biological organisms and collective insect constructions are exceptional examples of complex systems that are both self-organized and architectural.

This book is the first initiative of its kind toward establishing a new field of research, Morphogenetic Engineering, to explore the modeling and implementation of “self-architecturing” systems. Particular emphasis is placed on the programmability and computational abilities of self-organization, properties that are often underappreciated in complex systems science—while, conversely, the benefits of self-organization are often underappreciated in engineering methodologies.

Altogether, the aim of this work is to provide a framework for and examples of a larger class of “self-architecturing” systems, while addressing fundamental questions such as

> How do biological organisms carry out morphogenetic tasks so reliably?
> Can we extrapolate their self-formation capabilities to engineered systems?
> Can physical systems be endowed with information (or informational systems be embedded in physics) so as to create autonomous morphologies and functions?
> What are the core principles and best practices for the design and engineering of such morphogenetic systems?

The intended audience consists of researchers and graduate students who are working on, starting to work on, or interested in programmable self-organizing systems in a wide range of scientific fields, including computer science, robotics, bioengineering, control engineering, physics, theoretical biology, mathematics, and many others.