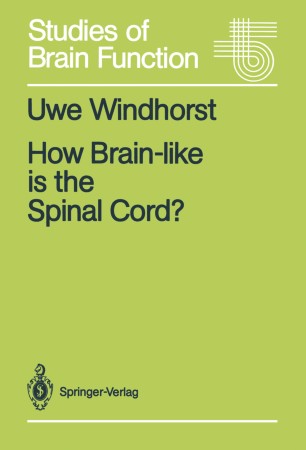 How Brain-like is the Spinal Cord?

"Theorizing about brain functions is often considered slightly disreputable and anyhow a waste of time -perhaps even 'philoso- ical'" 1 P. S. CHURCHLAND At present there are no unanimously accepted general con­ cepts of brain operation and function. This is especially the case with regard to so-called "higher" functions such as per­ ception, memory or the coupling between sensory input and motor output. There are a number of different reasons for this. Some may be related to experimental limitations allowing the simultaneous recording of the activities of only a restricted number of neurones. But there are also conceptual difficulties hindering the transition from "single-neurone" schemes, in which neurones are assigned relatively specific tasks (such as feature detection), to more complex schemes of nerve cell as­ semblies (for a discussion of some of the difficulties see Abeles 1982; von der Malsburg 1981; Kriiger 1983). Whilst much is known about the basic properties and functions of single neu­ rones, whose operations we hope to understand in the foresee­ able future, this does not hold true in the same way for the working of large assemblies of neurones.