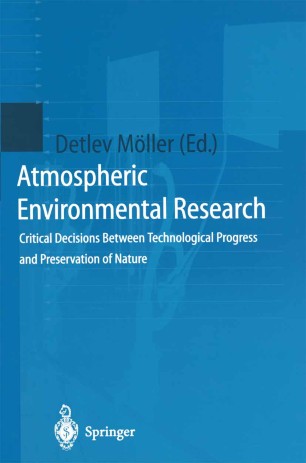 Critical Decisions Between Technological Progress and Preservation of Nature

This is an extended version of lectures that were held at the summer workshop Atmosphiirische Umweltforschung im Spannungsfeld zwischen Technik und Natur (At­ mospheric Environmental Research between Technology and Nature) at the Techni­ 16, 1996. We were very happy to have Paul J. Crutzen, cal University in Cottbus on July winner of the Nobel Prize for chemistry in 1995, presenting the key lecture on glo­ bally changing chemistry in the atmosphere. Over the last decades, atmospheric chem­ istry has been established step by step, not just as an applied discipline of chemistry, but also as a key discipline for our understanding of air pollution, biogeochemical cycling, and climactic processes as well. In fact, the new definition of meteorology as the science of physics and chemistry of the atmosphere expresses this development very well. The chemistry of the atmosphere is strongly influenced by anthropogenic emissions, even on a global scale. As a result of emissions and chemical reactions, the chemical composition of the atmosphere influences the ecosystems directly via depo­ sition of trace substances, and indirectly by changing the physical climate. Therefore, in this book we combined state-of-the-art lectures describing the physical and chemi­ cal status of the atmosphere and selected issues representing the interface between atmosphere, technology and nature. Oxidising capacity, heterogeneous processes and acidity still remain as key issues in atmospheric chemistry, even in regions where efficient air control measures have been adopted resulting in reduction of primary atmospheric pollutants.