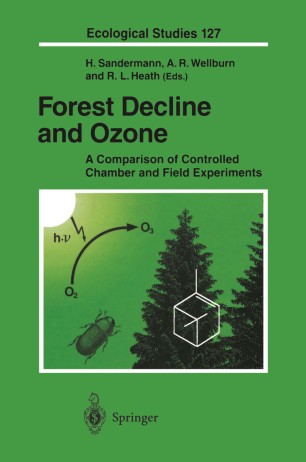 A Comparison of Controlled Chamber and Field Experiments

The idea for this book arose in 1993, after the Free State of Bavaria through its Bayrisches Staatsministerium rur Landesentwicklung und Umweltfragen (Bavarian Ministry of Regional Development and the Environment) decided to discontinue both the Bavarian project management (PBWU) for forest decline research and the multidisciplinary field research on the Wank Mountain in the Alps near Garmisch. Forest decline through the action of ozone and other photooxidants was a main topic of the supported re­ search in the Alps and will be a topic of new investigations in the Bavarian Forest. Many interesting results were obtained, but the researchers involved have not had sufficient time to allow reliable conclusions to be drawn. It was therefore decided to ask inter­ national experts for contributions in order to summarize the best available evidence of a possible link between ozone and forest decline - a topic which has been studied in the USA since the late 1950s and in Europe since the early 1980s. The original idea of Waldsterben as an irreversible large-scale dieback of forests in Germany was soon recognized to be wrong (Forschungsbeirat 1989). However, the new criteria used for the official German and European damage inventories (loss or yel­ lowing of needles or leaves, tree morphology) indicate that per­ sistently high percentages of damaged spruce and pine remain, and there is an increasing percentage of damaged beech and oak, with a high proportion of biotic disease (Forschungsbeirat 1989; UN-ECE 1995).