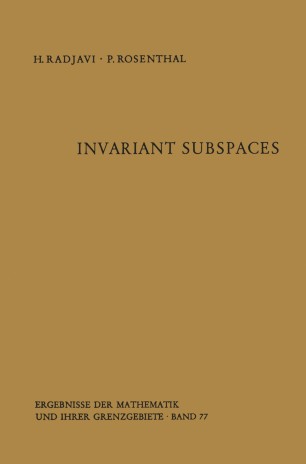 In recent years there has been a large amount of work on invariant subspaces, motivated by interest in the structure of non-self-adjoint of the results have been obtained in operators on Hilbert space. Some the context of certain general studies: the theory of the characteristic operator function, initiated by Livsic; the study of triangular models by Brodskii and co-workers; and the unitary dilation theory of Sz.­ Nagy and Foia!? Other theorems have proofs and interest independent of any particular structure theory. Since the leading workers in each of the structure theories have written excellent expositions of their work, (cf. Sz.-Nagy-Foia!? [1], Brodskii [1], and Gohberg-Krein [1], [2]), in this book we have concentrated on results independent of these theories. We hope that we have given a reasonably complete survey of such results and suggest that readers consult the above references for additional information. The table of contents indicates the material covered. We have restricted ourselves to operators on separable Hilbert space, in spite of the fact that most of the theorems are valid in all Hilbert spaces and many hold in Banach spaces as well. We felt that this restriction was sensible since it eases the exposition and since the separable-Hilbert­ space case of each of the theorems is generally the most interesting and potentially the most useful case.