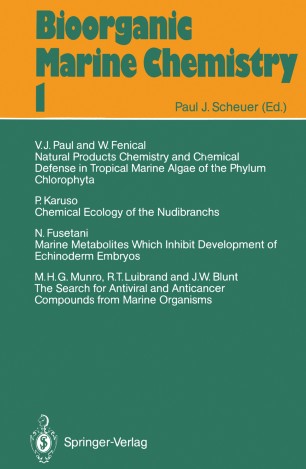 The present series, "Bio-organic Marine Chemistry," is being launched at a time when we have the fundamental knowledge and the requisite instrumentation to probe the molecular basis of many biological phenomena. The final volume of "Marine Natural Products-Chemical and Biological Perspectives" (Academic Press), which may be con­ sidered the precursor of this series, was published in 1983. In that series, which I edited, primary emphasis was placed on molecular structure and phyletic relationships. This focus was compatible with the major concerns of a growing research community in the field of marine natural products. Moreover, a need existed for timely reviews of a rapidly expanding and widely scattered primary literature. As I read again the Preface to Volume 1 (1978), I am amazed at the changes in direction and emphasis which have taken place during these few intervening years. Sufficient basic data are now at hand to gauge the breadth of the marine natural product spectrum and to raise questions of functions, both within and outside the marine ecosystem. Although we have few answers, the questions have become meaningful and pointed. Furthermore, the task of tracking and cataloguing the steady stream of fascinating new structures has been assumed by Faulkner's periodic surveys in Natural Product Reports, a bimonthly publication of the Royal Society of Chemistry. The study of marine natural products remains firmly anchored in chemistry, i. e. in molecular integrity, yet continues to seek greater involvement in functional biology.