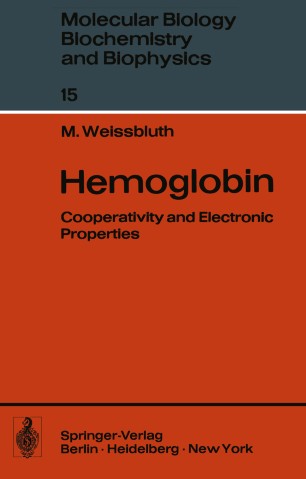 Approximately one third of the mass of a mammalian red blood cell is hemo­ globin. Its major function is to bind oxygen at the partial pressure prevailing in the lungs and to release it to the tissues where the partial pressure is lower. The process whereby hemoglobin performs this essential physiological role is characterized by a cooperative interaction among its constituent subunits. A great deal of research effort has been devoted to this interaction, going back at least as far as the fitst decade of this century. Moreover, cooperativity in hemo­ globin is probably not unique; it may well be one instance of a general class of interactions that occur in biological molecules. Certain enzymes with a variety of regulatory and catalytic functions, for example, contain several sites which interact in a highly specific manner such that the affinity of a given site for the substrate is markedly influenced by the state of binding at the other sites. But whereas we know very little of the structure of most enzymes of this type, hemo­ globin is one of a very small number of biological molecules whose immensely intricate machinery has been revealed to us. We owe this insight to the group under the leadership of M. F. PERUTZ in Cambridge, England, whose research over a period of several decades culminated in a detailed description of the three­ dimensional structure.