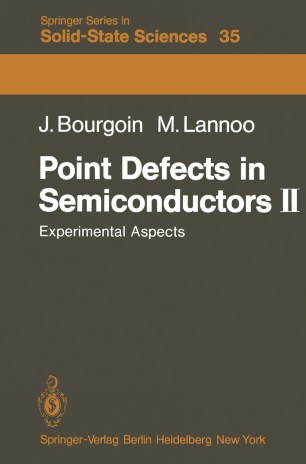 In introductory solid-state physics texts we are introduced to the concept of a perfect crystalline solid with every atom in its proper place. This is a convenient first step in developing the concept of electronic band struc­ ture, and from it deducing the general electronic and optical properties of crystalline solids. However, for the student who does not proceed further, such an idealization can be grossly misleading. A perfect crystal does not exist. There are always defects. It was recognized very early in the study of solids that these defects often have a profound effect on the real physical properties of a solid. As a result, a major part of scientific research in solid-state physics has,' from the early studies of "color centers" in alkali halides to the present vigorous investigations of deep levels in semiconductors, been devoted to the study of defects. We now know that in actual fact, most of the interest­ ing and important properties of solids-electrical, optical, mechanical- are determined not so much by the properties of the perfect crystal as by its im­ perfections.