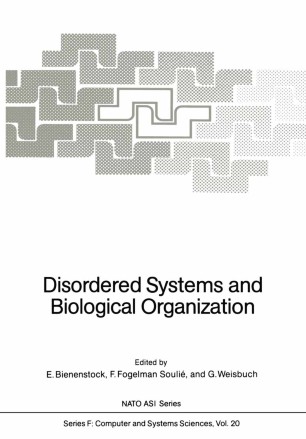 The NATO workshop on Disordered Systems and Biological Organization was attended, in march 1985, by 65 scientists representing a large variety of fields: Mathematics, Computer Science, Physics and Biology. It was the purpose of this interdisciplinary workshop to shed light on the conceptual connections existing between fields of research apparently as different as: automata theory, combinatorial optimization, spin glasses and modeling of biological systems, all of them concerned with the global organization of complex systems, locally interconnected. Common to many contributions to this volume is the underlying analogy between biological systems and spin glasses: they share the same properties of stability and diversity. This is the case for instance of primary sequences of biopo Iymers I ike proteins and nucleic acids considered as the result of mutation-selection processes [P. W. Anderson, 1983] or of evolving biological species [G. Weisbuch, 1984]. Some of the most striking aspects of our cognitive apparatus, involved In learning and recognttlon [J. Hopfield, 19821, can also be described in terms of stability and diversity in a suitable configuration space. These interpretations and preoccupations merge with those of theoretical biologists like S. Kauffman [1969] (genetic networks) and of mathematicians of automata theory: the dynamics of networks of automata can be interpreted in terms of organization of a system in multiple possible attractors. The present introduction outlInes the relationships between the contributions presented at the workshop and brIefly discusses each paper in its particular scientific context.