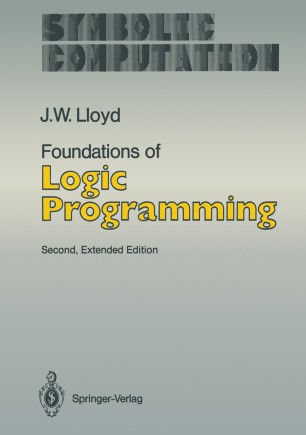 In the two and a half years since the frrst edition of this book was published, the field of logic programming has grown rapidly. Consequently, it seemed advisable to try to expand the subject matter covered in the first edition. The new material in the second edition has a strong database flavour, which reflects my own research interests over the last three years. However, despite the fact that the second edition has about 70% more material than the first edition, many worthwhile topic!! are still missing. I can only plead that the field is now too big to expect one author to cover everything. In the second edition, I discuss a larger class of programs than that discussed in the first edition. Related to this, I have also taken the opportunity to try to improve some of the earlier terminology. Firstly, I introduce "program statements", which are formulas of the form A+-W, where the head A is an atom and the body W is an arbitrary formula. A "program" is a finite set of program statements. There are various restrictions of this class. "Normal" programs are ones where the body of each program statement is a conjunction of literals. (The terminology "general", used in the first edition, is obviously now inappropriate).